So far, we have discussed a number of Lean ideas that can be implemented in an organization. But where do you start? One answer is PDSA (also known as PDCA): 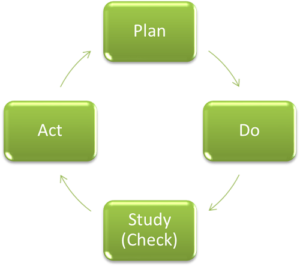 This cycle was developed by Walter Shewhart in the late 1930s and made popular in the 1980s by Edward Deming. Let’s look at each aspect more closely.